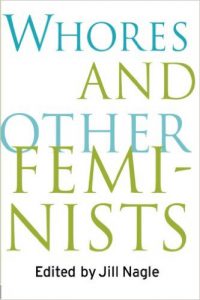 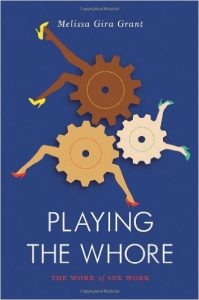 Recent years have seen a panic over “online red-light districts,” which supposedly seduce vulnerable young women into a life of degradation, and New York Times columnist Nicholas Kristof’s live tweeting of a Cambodian brothel raid. But rarely do these fearful, salacious dispatches come from sex workers themselves, and rarely do they deviate from the position that sex workers must be rescued from their condition, and the industry simply abolished — a position common among feminists and conservatives alike.
In Playing the Whore, journalist Melissa Gira Grant turns these pieties on their head, arguing for an overhaul in the way we think about sex work. Based on ten years of writing and reporting on the sex trade, and grounded in her experience as an organizer, advocate, and former sex worker, Playing the Whore dismantles pervasive myths about sex work, criticizes both conditions within the sex industry and its criminalization, and argues that separating sex work from the “legitimate” economy only harms those who perform sexual labor. In Playing the Whore, sex workers’ demands, too long relegated to the margins, take center stage: sex work is work, and sex workers’ rights are human rights.

This groundbreaking book explodes several myths: that selling sex is completely different from any other kind of work; that migrants who sell sex are passive victims; and that the multitude of people out to save them are without self-interest.
Laura Agustín makes a passionate case against these stereotypes, arguing that the label ‘trafficked’ does not accurately describe migrants’ lives and that the ‘rescue industry’ disempowers them. Based on extensive research amongst migrants who sell sex and social helpers, Sex at the Margins provides a radically different analysis. Frequently, says Agustín, migrants make rational choices to travel and work in the sex industry. Although they are treated like a marginalised group they form part of the dynamic global economy.
Both powerful and controversial, this book is essential reading for all those who want to understand the increasingly important relationship between sex markets, migration and the desire for social justice. 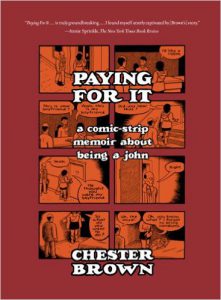 Paying for It was easily the most talked-about and controversial graphic novel of 2011, a critical success so innovative and complex that it received two rave reviews in The New York Times and sold out of its first print run in just six months. Chester Brown’s eloquent, spare artwork stands out in this paperback edition.
Paying for It combines the personal and sexual aspects of Brown’s autobiographical work (I Never Liked You, The Playboy) with the polemical drive of Louis Riel. He calmly lays out the facts of how he became not only a willing participant in but also a vocal proponent of one of the world’s most hot-button topics―prostitution. While this may appear overly sensational and just plain implausible to some, Brown’s story stands for itself. Paying for It offers an entirely contemporary exploration of sex work―from the timid john who rides his bike to his escorts, wonders how to tip so as not to offend, and reads Dan Savage for advice, to the modern-day transactions complete with online reviews, seemingly willing participants, and clean apartments devoid of clichéd street corners, drugs, or pimps.
Complete with a surprise ending, Paying for It continues to provide endless debate and conversation about sex work

A provocative history that reveals how sex workers have been at the vanguard of social justice movements for the past fifty years while building a movement of their own that challenges our ideas about labor, sexuality, feminism, and freedom
Documenting five decades of sex-worker activism, Sex Workers Unite is a fresh history that places prostitutes, hustlers, escorts, call girls, strippers, and porn stars in the center of America’s major civil rights struggles. Although their presence has largely been ignored and obscured, in this provocative history Melinda Chateauvert recasts sex workers as savvy political organizers-not as helpless victims in need of rescue.
Even before transgender sex worker Sylvia Rivera threw a brick and sparked the Stonewall Riot in 1969, these trailblazing activists and allies challenged criminal sex laws and “whorephobia,” and were active in struggles for gay liberation, women’s rights, reproductive justice, union organizing, and prison abolition.
Although the multibillion-dollar international sex industry thrives, the United States remains one of the few industrialized nations that continues to criminalize prostitution, and these discriminatory laws put workers at risk. In response, sex workers have organized to improve their working conditions and to challenge police and structural violence. Through individual confrontations and collective campaigns, they have pushed the boundaries of conventional organizing, called for decriminalization, and have reframed sex workers’ rights as human rights. 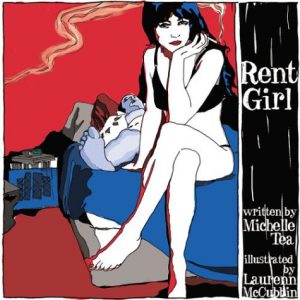 Publishers Weekly called Michelle Tea “”a modern-day Beat, a kind of pop ambassador to the world of the tattooed, pierced, politicized and sex-radical queer-grrls of San Francisco. [She] dramatizes the hopes and hurts, apathies and ambitions of young lesbians looking for love in the Mission District.”” Rent Girl continues Tea’s graphic and uncompromising autobiographical bender, telling the story of her years as a prostitute, with provocative and richly illustrated work by Laurenn McCubbin. 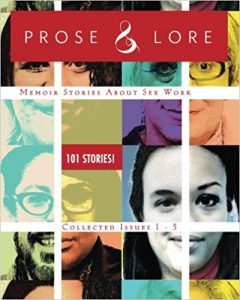 Prose & Lore is the Red Umbrella Project’s literary journal, which collects memoir stories about sex work in two issues per year (Fall/Winter and Spring/Summer). The stories are original to Prose & Lore, and about 75% of the authors in each issue are previously unpublished. Many of the contributors participate in our memoir workshops and drop-in writing sessions. “[The stories] that comprise this journal are straightforward without a lot of literary tropes or tricks yet their harsh and sticky realities pull readers in. A testament to Red Umbrella’s workshops, from which most of these works hail, they’re entertaining and edifying, even enlightening, at times. They are not by any means self-pitying stories but come from perspectives that are often humorous, seductive, pissed, confused, and psycho-sexually indignant.” – The Review Review “It is not uncommon for the media to skew the perspective of those who have worked in the sex industry, painting a picture of bad and dangerous people, with real life stories often going unheard. But since 2009, the Red Umbrella Project, a nonprofit group based in Downtown Brooklyn, has been providing a venue and an outlet for unheard voices of American sex workers.” – Downtown Brooklyn “Gutsy wisdom permeates these pages. Prose & Lore brings together a keen array of lived experiences and authentic voices.” – Amber Dawn, author of How Poetry Saved My Life: A Hustler’s Memoir “In this collection of creative nonfiction, people who’ve tangled with the sex industry write about the complications that arise in the mix of sex and money. From the accounts of love and loss, occupational hazards and tricks of the trade to personal stories of hope, resistance and survival, Prose & Lore is a fiery collection of narratives by people who have walked the walk, and are now telling their tales.” – Daily Loaf, CL Tampa Bay “Top 10 Most Provocative Books” 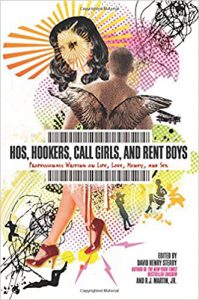 The only thing the writers in this book have in common is that they’ve exchanged sex for money. They’re PhDs and dropouts, soccer moms and jailbirds, $2,500-a-night call girls and $10 crack hos, and everything in between. This anthology lends a voice to an underrepresented population that is simultaneously reviled and worshipped.
Hos, Hookers, Call Girls, and Rent Boys is a collection of short memoirs, rants, confessions, nightmares, journalism, and poetry covering life, love, work, family, and yes, sex. The editors gather pieces from the world of industrial sex, including contributions from art-porn priestess Dr. Annie Sprinkle, best-selling memoirist David Henry Sterry (Chicken: Self-Portrait of a Young Man for Rent), sex activist and musical diva Candye Kane, women and men right off the streets, girls participating in the first-ever National Summit of Commercially Sexually Exploited Youth, and Ruth Morgan Thomas, one of the organizers of the European Sex Work, Human Rights, and Migration Conference.
Sex is a billion-dollar industry. Meet the real people who are its flesh and blood. 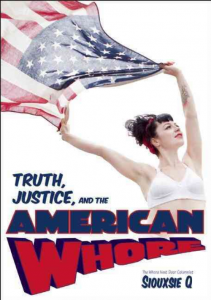 Confessions of the Whore Next Door features striking images of and probing words by the quintessentially American whore! Wrapped in the American flag, stating opinions that your mother likely won’t approve, constructing arguments that will make you blush, Siouxsie Q is a storyteller of the first order, and her stories embody sex appeal, political activism, and good humor!
Siouxsie Q is the creator and host of the acclaimed podcast The WhoreCast, which showcases the stories, art, and voices of American sex workers. Siouxsie Q’s column “The Whore Next Door” appears in theSF Weekly. 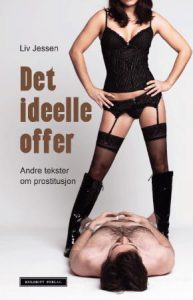 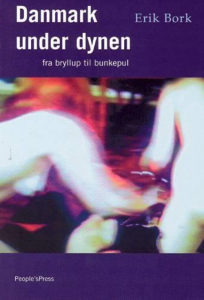 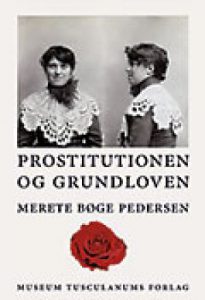 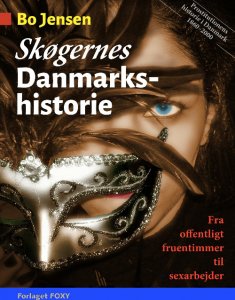 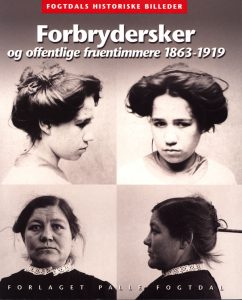 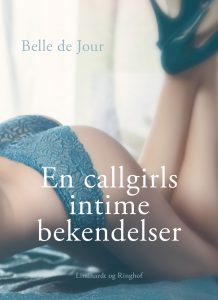 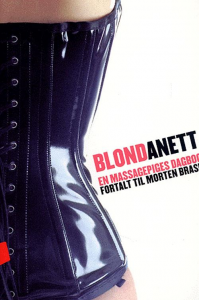 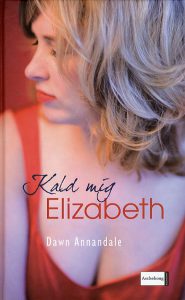 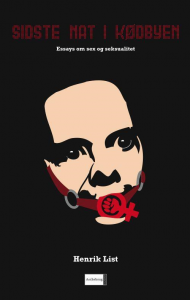 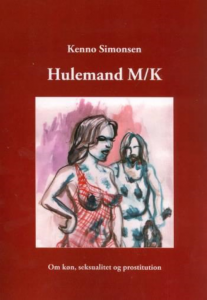 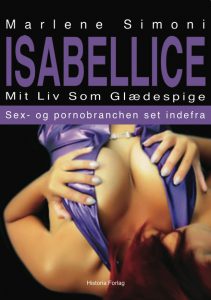 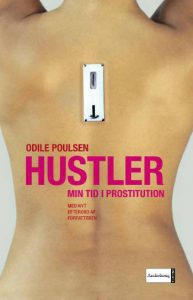 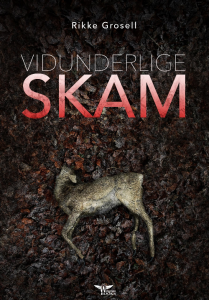 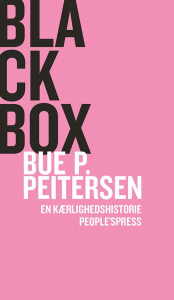 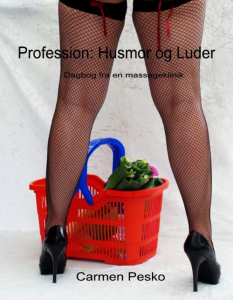 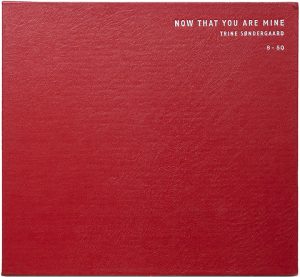 Now That You Are Mine is a series of photographs taken between 1997- 2000 by the Danish artist Trine Søndergaard, photographs of prostitutes on the streets where she used to live in the red-light district of Copenhagen.
Ethical considerations have always been an integral part of Søndergaard’s documentary works: works in which the investigation of the exchange of human contact – also between the photographer and photographed – merges with the artistic drive to transgress the boundaries of the private sphere. By choosing to work with a conspicuous flash and in colour in the late ’90s, Søndergaard shattered the traditional narrative codes of documentary photography in a conscious challenge to aestheticised and distanced black and white ‘reality’.
Søndergaard goes beyond the walls of the private sphere, following the women and the ‘fly on the wall’. Released from these conventions, Søndergaard’s work embodies and explores the dualities of her own role as an artist, but also as a woman. The artist was personally and daily subjected to harassment by male customers on the street where she lived. Her own subjection to this male gaze marked the beginning of the project. She realised that she was not “seen”. That she existed only as a projected fantasy of a woman for the male customer. It is this fantasy her work ruthlessly exposes, a sexual fantasy in harsh contrast to the reality of infected needle sores and bruised skin.
During the development of the project an artistic exploration and experimentation emerged. Some of the images are in gaudy, bright colours, others in muted, pale tones. Late in the project she often eliminated the women who were her original subject from the final work, choosing a compelling minimalism focussing on details not immediately associated with the harsh realities and tired stereotypes of prostitution. This is the artist’s representation of a reality temporarily shared – but as she consciously and visually acknowledges – never lived. A central acknowledgement in Søndergaard’s uniquely respectful and moving portrayal of life on the streets and behind closed doors. 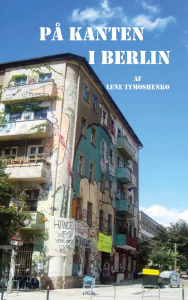 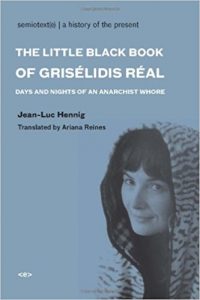 The Little Black Book of Grisélidis Réal is the portrait of a true humanist who made a career out of compassion. Hailed as a virtuoso writer and a “revolutionary whore,” Grisélidis Réal (1929–2005) chanced into prostitution at thirty-one after an upper-class upbringing in Switzerland. Serving clients from all walks of life, Réal applied the anarcho-Marxist dictum “from each according to his abilities, to each according to his needs” to her profession, charging sliding-scale fees determined by her client’s incomes and complexity of their sexual tastes. Réal went on to become a militant champion of sexual freedom and prostitutes’ rights. She has described prostitution as “an art, and a humanist science,”

Being a sex worker isn’t something to write home about for most women (and men) in the $12 billion-a-year sex industry.

Prostitutes, strippers, and adult film stars put themselves, and what they do for a living, out on the street, stage, and TV screen every day, but they often keep their working lives hidden from friends, family, and other employers. They do this because sex work is widely considered illegal, unhealthy, and immoral.

Edited by Annie Oakley, Working Sex, New Voices from a Changing Industry features stories and contributions from sex workers—strippers, prostitutes, domes, film stars, phone sex operators, and internet models—who are speaking out. This provocative anthology showcases voices from a vibrant community intent on unmasking the jobs they do with dignity and pride.